The Epsom Derby is renowned for combining history, with elegance and glamour. With an atmosphere like no other meet in the year, this years Fashion stakes definitely did not disappoint.

I like many other women who attended, spent the week busy preparing for the day.

I personally believe that well kept finger nails are as important as a good hair cut. So on Tuesday I visited Klasse Spa to have my nails done. I opted for a nude nail polish which would match any outfit (Nude nails are currently the hottest trend at the moment, the closer the colour is to your foundation the better). 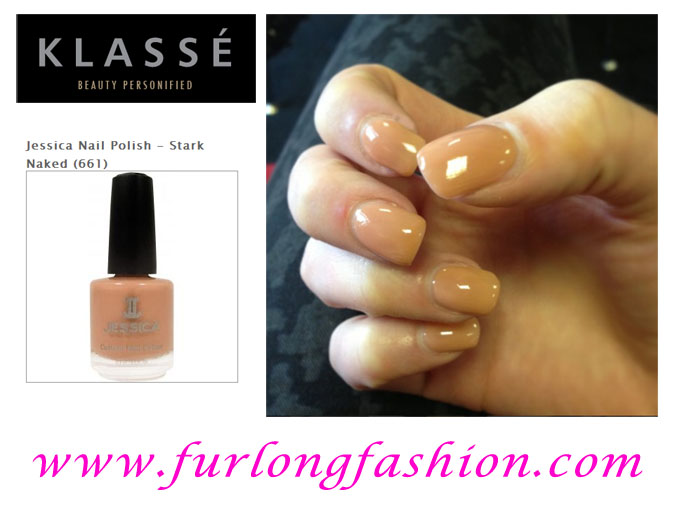 On Wednesday I collected my hat from Jennifer at Jenny Roberts Millinery. Three weeks prior I had visited Jennifer with my dress and she had kindly agreed to make a hat to match. Upon collection I only had a vague idea of what it would look like. When I saw it for the first time I was overwhelmed at how beautiful it was and I couldn't wait to wear it to the Derby (Visit my previous post on how the hat was made)

We had to set off from Retford at 7am which meant there was no time to visit  a hairdresser. So at 5am I started the process of making myself look as well groomed as possible starting with my hair. I chose to curl my hair and pin it to the side to complement the style of my hat.

I chose to wear a Black and White Hybrid bodycon dress with a lace skirt from ASOS which was detailed with a gold zip all the way down the back, A hat from Jenny Roberts Millinery which was made especially to match the dress with a beautiful lace trim. Black Christian Louboutin Pointed Stilletos, Black Chanel Classic Bag and Wolford Tights.

As we approached the course we drove past hordes of beautifully turned out race-goers who had opted to walk to the course in flat shoes / flip flops whilst carrying there heels. 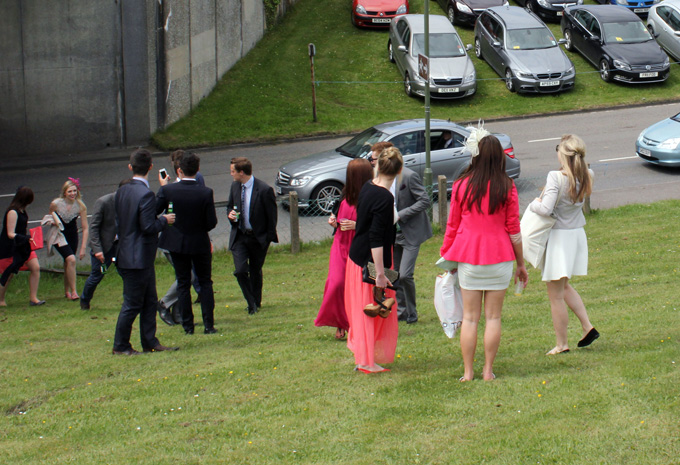 It's no secret that my favourite part of the Derby is the Fashion on show. While the horses in the 2013 Epsom Derby ran a close race with Ruler of the World coming home first giving Trainer Aiden O'Brien his 4th Epsom Derby win, My eyes were firmly on the Royals in attendance. Notably Her Majesty the Queen and Prince Philip chose colour co-ordinating outfits. The Queen wore powder blue Coat with navy accessories and a Powder Blue hat by Angela Kelly, whilst Prince Philip wore a Blue tie to complement the Queens outfit choice.


Princesses Beatrice and Eugenie were also in attendance with Princess Beatrice accessorising her monochrome graphic print dress with a cloche style hat made by Karen Henriksen whilst Princess Eugenie opted for a more neutral full skirted dress accompanied with a taupe hat by Sarah Cant and nude heels (not dissimilar to the LK Bennet shoes favoured by Princess Catherine).


Unfortunately the weather on Saturday was a little disappointing. So most of my time was spent in the owner and trainers area, which definitely was not short of sartorial splendour.

As soon as I entered the owners and trainers I spotted Trish Callan, (wife of top jockey Neil Callan) who was dressed immaculately.


Trish's hair was tied neatly in a bun just shown in the above pictures.

Trish was accompanied by her son Henry who looked ever the young fashionista perfectly acessorised with a blue pocket square and amazing loafers with horse bit embellishment (very Gucci). Trish's niece was dressed in a lovely white dress and lemon cardigan.


Other race-goers spotted in the owners and Trainers were - 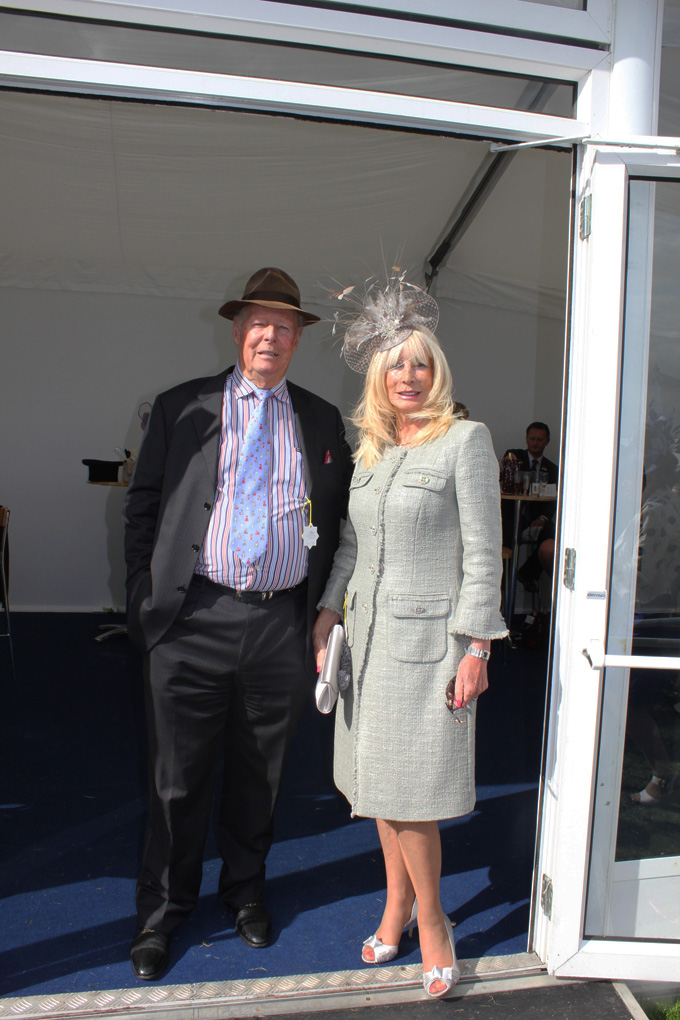 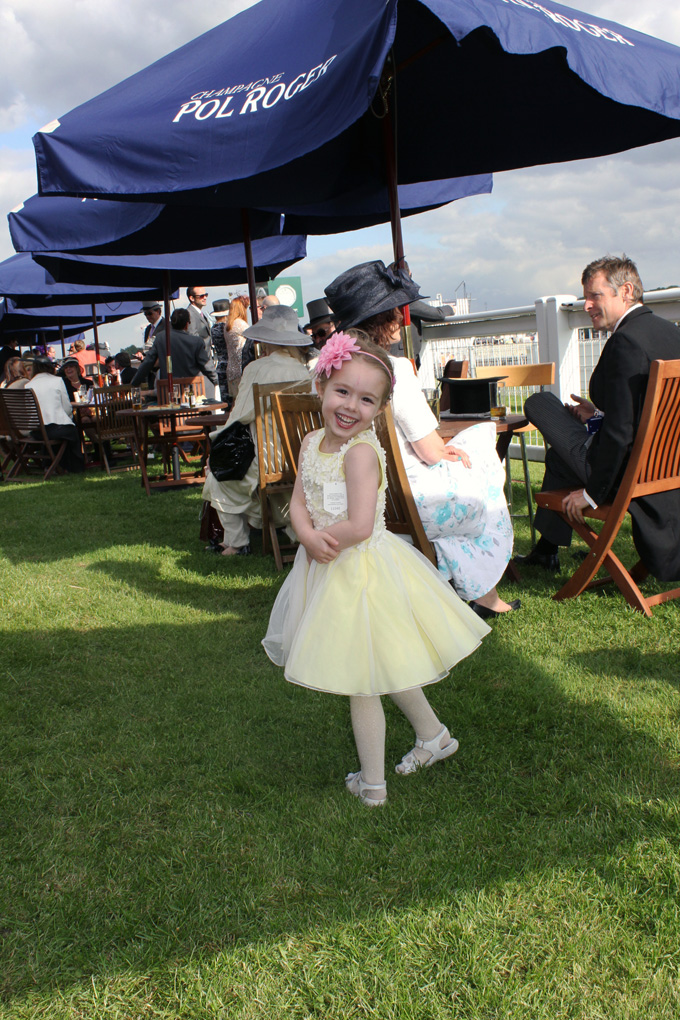 As has become expected many celebrities also flocked to the downs. The majority of whomes heads were adorned by the official Hat designer Philip Treacys. Some of which are shown below.


Personally my favourite celebrity was Les Miserables star Samantha Barks who wore a Blue, black and White Body-con Dress designed by Antonio Beradi which can be purchased from Harrods (there is a 30% sale on this weekend for loyalty card members) With co-ordinating Philip Treacy hat and accessories.

As is the case with the majority of formal dressing for men it is the attention to detail that sets them apart from the crowd. Men lack the choice that women have when attending the races. Morning suits were not compulsory throughout the whole of the course only in the queens stand.

I do think that it is nice to see men engage in a tradition and it makes the whole atmosphere a little more special. Because of this I will be concentrating on the morning dress on show at the Epsom Derby.

The most popular variation of morning dress was the black tailcoat with plain grey or patterned trousers usually in a subtle check, stripe or hounds-tooth. The next most popular choice seemed to be the grey tailcoat with matching trousers. Both looked great it was just a matter of taste.The fit of the tailcoat and trousers is obviously the basis of a lovely outfit.

Next we have the Top Hat, a fantastic piece of our history that is often done very poorly. Top Hats although still produced are not made with the same methods or material and the finished article is not a patch on the original.

Vintage silk Top Hats are still readily available and there are many people that specialise on the internet. Silk Top Hats can vary significantly in price and is is usually the larger and rarer ones that can be worth many thousands of pounds, but in my eyes they are worth every penny.

Then there was the shirt/tie/pocket square combination. There are limitless options available to a man when picking these three and it is really where the gentlemen made themselves stand out from the next. I personally like to see a white collar with morning dress whether that be a plain white shirt or just white collar and cuffs on a coloured or patterned body. The key to success seemed to be a well fitted waist coat, and as there are no stipulation in the dress code these can come in all different shape, size and colours, some of which are featured below.

Lapel flower's were also seen although this is a much more common sight at Royal Ascot. It adds another nice touch of colour and it should compliment the colours in your outfit.

I was disappointed that in the owners and trainers there were quite a few people that had not really made an effort. Although these were out numbered by some very dapper gentlemen that had taken the dress code into consideration and were wearing there morning suits to perfection. 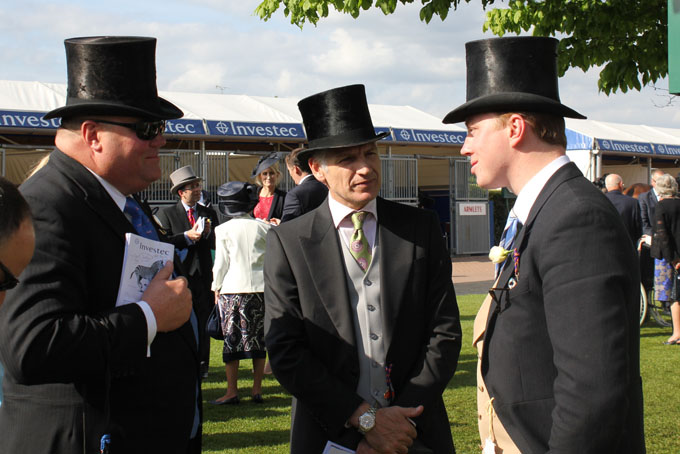 All in all the fashion on the Downs lived up to the 'Sport of Kings' and Queens.


With Royal Ascot only two weeks away one can only imagine what that will bring. But rest assured, it is likely to bring an eclectic mix of well-dressed Ladies and Gentlemen keen to be successful in both the betting and the style stakes.